I put a link in the navigation bar (or drop down menu on your phone if you're not my mom) that goes right to my YouTube channel.  I'm finally starting to feel motivated to accomplish something during the pandemic, so I thought a safe activity would be creating music videos.

Posted by Dennis at 5:12 PM No comments: 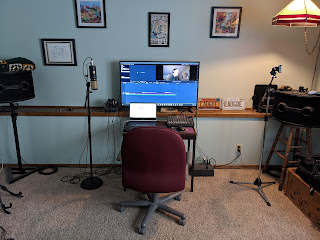 Just wanted to type up a 'splainer for the tech side of some home music video production.  Most of it is shown in the picture above, so really not a lot to it.
The signal starts at the microphones.  The big one is a CAD Equitek E-200 from, I don't know, 15-20 years ago?  The other one is an AKG C-1000S from at least 20 years ago.
The mics' XLR cables terminate at the little Mackie mixer, a 1202-VLZ.  Again, ancient history.
The mixer outputs to an AVID Mbox Mini USB interface, which does the analog-to-digital conversion of a mix of the two microphones' signals. Mono or Stereo.  My son gave me this box years ago and I wondered, what would I do with this?  Now, I know.
The USB interface connects to a couple-years-old Chromebook.  There, on the Linux side of its world, I have been running Audacity for audio data collection and mixing and Flowblade for the video editing.
The drill goes like this:
Spend an inordinate amount of time setting the gain levels between the mics and the mixer, and the mixer and the USB interface.  If this isn't right, nothing else really matters and you can stop here.
Record audio tracks one (mono) or two (stereo) at a time into Audacity while simultaneously shooting video (and not-necessarily-high-quality-audio) from your cellphone or camera.
Pile up as many of these audio/video pairs as you want.
Using Audacity, mix the pile of mono or stereo audio tracks into a single stereo .WAV file.
Collect the video files from your cellphone or camera, probably .MP4 files.
Use Flowblade to produce the finished product by combining the various .MP4 video files with the .WAV audio file. (The coolest feature of Flowblade is that it can sync a video file from a phone to the .WAV file you created with Audacity.  It somehow mathematically matches stuff up and it works really well.)
Render the final .MP4 video from Flowblade.
Posted by Dennis at 10:57 AM No comments:

Cabin fever from doing a little too much "social distancing" in reaction to the COVID-19 virus led to this playtime fun.

Fender announced the Tenor Tele at NAMM, January 2019, but didn't ship any until much later in the year.  I think I received mine on New Year's Eve Eve.  It arrived strung up like the higher four strings of a guitar (DBGE); very light.  I wanted an electric octave mandolin, so I fit bigger strings on it and tuned it GDAE.  The PR and Leslie have been in the family forever.

This is a Los Lobos tune that I've known for a long time and it sounds really cool with this setup.

This year, our venue for the annual Pockets Reunion was Howdershell Park in Hazelwood, MO.  Here are a couple videos from that party.


And here's one from Facebook, but I'm guessing you'll need to be logged into FB for it to work:

Jessica
Posted by Dennis at 7:43 AM No comments:

My life-long friend Tommy passed 12/31/17.  We had learned about bluegrass music together back in the 70's.  He left me his banjo, so I felt compelled to learn something on it.  This is a  John Hartford tune Tommy used to sing.

Posted by Dennis at 8:12 PM No comments:

Haymakers are returning from a tour that took us to Port Royal, SC, where we performed for the city's "Street Music on Paris Street" event. 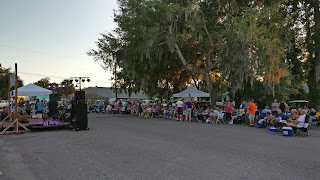 Here's a link to a video of our first set:

Haymakers performing in Port Royal, SC
Posted by Dennis at 7:11 AM No comments: 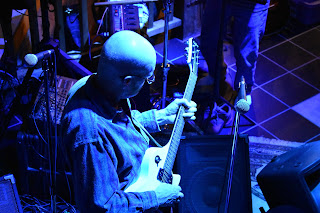 This year's Pockets reunion featured cool lighting.  Instant Blue Man Group, but without the paint.
Posted by Dennis at 8:51 AM No comments: